Felinto's visit to the CAVE at LIMSI

BlenderVR has been implemented and tested on two different VR projection type platforms at LIMSI-CNRS.

The Smart-I2 platform is a 2 wall passive stereoscopic system with a single graphics PC driving 4 projectors. Spatial audio rendering is accomplished with the integration of Wave-Field Synthesis into the projection screens.

The EVE platform is a 4 wall rear projection CAVE environment supporting active/passive/combined stereoscopic rendering for multiple users. Each projector is connected to a separate graphics node, with additional nodes dealing with a various of input/output modalities. Spatial audio rending is accomplished through an Ambisonic 15ch array as well as 2 wireless binaural headsets. 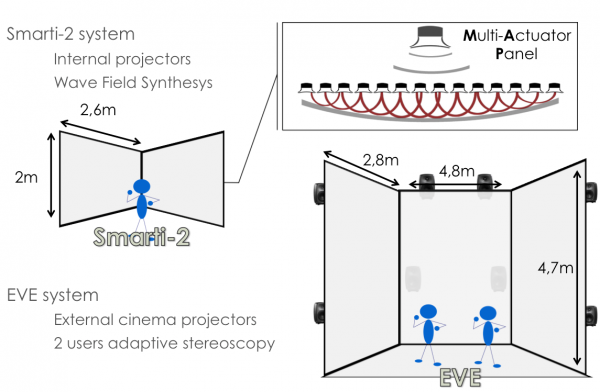 Here is an example of a scene by Martins Upitis which has been “VR-ised” on the Smart-I2 platform Smart-I2 overview.

Thanks so much Martins for your amazing work (http://devlog-martinsh.blogspot.fr/) 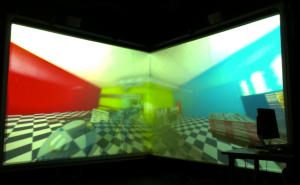 Example of a Mountain scene, used as a demonstrator for Head Controlled Navigation with 2 concurrent users in the EVE System (www.limsi.fr/venise/EVEsystem). 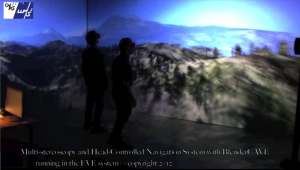